Why Does No One Ever Talk About Sweden Anymore?
Back
By Fast Eddy

One of the most consistently repeated trends of COVID has been the premature declarations of victory from areas with a perceived level of “success” in “controlling” the pandemic.

It’s happened in countries all over the world — Vietnam, Japan, Taiwan, Australia, Mongolia — just to name a few examples. They all have been praised for their ability to “control” the virus with masks and public health measures, only to then see cases invariably skyrocket.

Incompetent media reporting and dangerously ignorant “expert” pontifications have been an infuriatingly persistent aspect of COVID messaging, with their incoherent ravings becoming increasingly desperate as time wears on.

On the flip side to inaccurate praise, the incomprehensible inability of experts to get anything right is perhaps best exemplified by Sweden.

“Experts” and the media declared Sweden was the world’s cautionary tale, a dangerous outlier who shunned The New Science™ of masks and lockdowns and stuck to established public health principles and pre-pandemic planning.

Over much of 2020 and into 2021, Sweden was persistently criticized by the media and on Twitter arguments due to comparisons to their neighbors, a standard curiously not applicable to most other countries around the world. Yet as we’ve progressed further into 2021, those same media outlets have suddenly gone quiet as their chosen victors have flailed unsuccessfully against ever increasing outbreaks.

So let’s see what’s transpired recently which resulted in the deafening silence, and examine what that means for The Science™, shall we?

To begin, we have to look at just how hyperbolic and inaccurate the media coverage of Sweden has been since the start of the pandemic.

Here’s Time from October 2020, with the headline providing an impressively succinct summary:

It’s a DISASTER. A DISASTER! It shouldn’t be a model for the rest of the world, they say.

The very first section of the article clearly exposes the heart of media incompetence:

The Swedish COVID-19 experiment of not implementing early and strong measures to safeguard the population has been hotly debated around the world, but at this point we can predict it is almost certain to result in a net failure in terms of death and suffering. As of Oct. 13, Sweden’s per capita death rate is 58.4 per 100,000 people, according to Johns Hopkins University data, 12th highest in the world (not including tiny Andorra and San Marino).

Got that? It is “almost certain to result in a net failure in terms of death and suffering.” The “12th highest” population adjusted death rate, they said.

How well did this age? 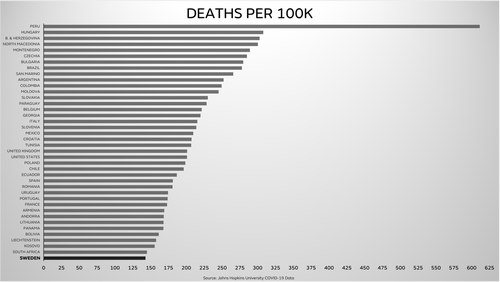 Not well! It did not age well.

Sweden now ranks 40th. Eleven months later, they went from 12th to 40th. Peru, Hungary, the Czech Republic, Brazil, Argentina, Colombia, Paraguay, Belgium, Italy, Mexico, Croatia, the United Kingdom, the United States, Poland, Chile, Spain, Romania, Uruguay, Portugal, France, South Africa all rank ahead of Sweden. Nearly every one of them has tried masks and lockdowns and to this point it’s resulted in a “net failure” in terms of “death and suffering” compared to Sweden.

Despite this, Sweden’s Public Health Agency director Johan Carlson has claimed that “the Swedish situation remains favorable,” and that the country’s response has been “consistent and sustainable.”

Ah yes, the laughable assertion that Sweden’s response was “consistent and sustainable.”

Except, of course, that’s exactly what that graph above illustrates: an approach that was consistent and sustainable because it didn't rely on indefinite mask mandates and business closures as methods to “control” COVID. As other countries saw their cumulative mortality rates skyrocket, Sweden dropped precipitously in the rankings due to their consistent, sustainable methods.

The article is unbelievably extensive, and looking back now, laughably pointless. The writer’s horror at Sweden’s acceptance that the pandemic would spread widely through the population leading to increased levels of natural immunity looks even more monumentally ignorant given the strength and durability of immunity conferred by previous infection.

And there were many, MANY others just like it. Check out the headline on this piece from World Politics Review:

Will There Be a Reckoning Over Sweden’s Disastrous ‘Herd Immunity’ Strategy?

The Telegraph headlined an article:

“Sweden has shown how not to tackle coronavirus, as it fights now to save face.”

There are dozens and dozens of similar pieces from all over the world.

So again allow me to remind you that Sweden ranks 40th in the world in mortality rate. I wonder if Insider described world mortality rate leader Peru’s lockdown and mask strategy as a “renegade” policy, with the government determined to mandate locking down and masking despite the “cost in lives.”

Oh and by the way, here’s excess mortality in Sweden since 2017 according to EUROMOMO:

That’s right, there’s only been a few weeks since the initial wave last spring where Sweden’s seen a “substantial increase” above normal ranges, and they’ve been at or near baseline for almost all of 2021. I wonder how many people around the world are aware of that.

It’s the same story seen in Los Angeles County, where hilariously timed and completely useless vaccine passport policies were just announced. The overwhelming majority of people are so hopelessly gaslit by media propaganda that they still actually believe that masks and closures matter, despite reality directly contradicting their assumptions:

The media’s depiction of Sweden’s results is an excellent illustration of their desire not to inform, but to coerce. They’re not functioning as simply messengers of information but activists, thoroughly consumed by a desire to force others to conform to their opinions.

They refuse to present information that counters the endless dictatorial mandates, instead promoting unquestioning compliance. Listen to us, do what you’re told and wear a mask, or it’s your fault if you get COVID and die. Listen to us and do what you’re told, or you’ll be labeled an “anti” and shunned from the acceptable society that “journalism” polices.

So let’s look at how things are going of late in a few regions that complied with the expert and media mandated edicts.

Standing in stark contrast to Sweden, Israel has been a media darling for doing exactly what they’re told by the groupthink mafia. They’ve vaccinated as aggressively and repeatedly as anywhere on earth, and they’ve had a seemingly endless series of mask mandates and fines for non-compliance. 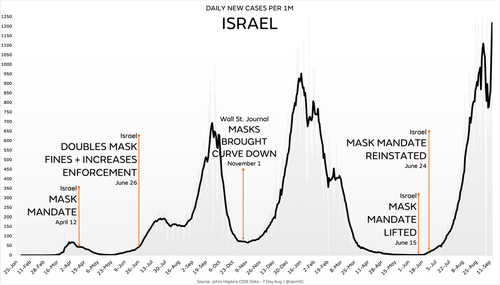 Then in early 2021, they were hailed as a successful example of “universal coverage and community infrastructure” due to their high vaccination rates, as Health Affairs explained:

And as this Reuters headline echoed in May:

So how is shining success story Israel doing compared to unmitigated disaster Sweden? 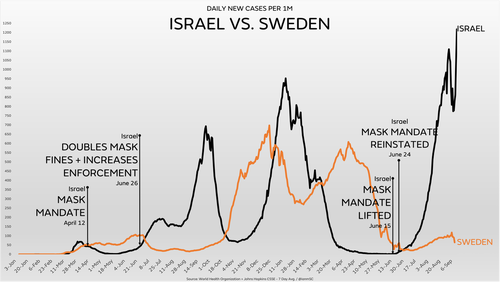 Now, it’s very likely Sweden will see another increase over the fall and winter, just as they did last year, but uh…that’s kinda the point isn’t it? The increases happen in waves, regardless of supposed “mitigation” efforts. And again, Israel has been repeatedly and endlessly praised for their success. Sweden is a “disaster” and a “renegade.” Yet Israel’s recorded 13,279 cases per 100,000 since they started counting, the 11th highest rate in the world, while Sweden’s recorded 11,111 cases per 100,000.

But that doesn’t matter, because Israel’s done what they’re told, and Sweden hasn’t. There are no masks, no vaccine passports, no draconian business closures. They have a “consistent and sustainable” approach that’s led to…fewer confirmed infections than countries like Israel.

You might be wondering, well those are just cases, what about deaths? That’s what really matters, right?

Here’s the recent trends by that measure too: 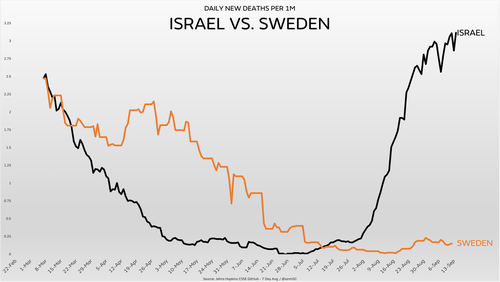 Now to be fair, Israel has a lower cumulative mortality rate, although unfortunately they are rapidly catching up. Although while their recent death rate is significantly higher, Time will never criticize Israel as a “disaster,” because they did what they were told. And that’s all that matters.

But it’s not just Israel, there’s been an interesting shift in case rates among Sweden’s “neighbors” as well.

Here’s how cases have looked in Finland and Norway compared to Sweden since June 1, 2021: 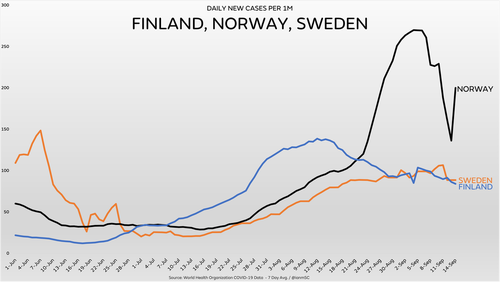 Well hmm. That isn’t how that’s supposed to go, is it?

Again, to be fair, cumulative rates in the other two countries are lower than Sweden, but how is it possible for them to have similar or worse numbers during any length of time given the unmitigated, renegade disaster of Sweden’s policy?

Their recent mortality rates per 100k are nearly identical as well:

How could this happen?!

At this point it’s positively absurd to lend credence to the absurd media, expert and Twitter narrative that claims Sweden can only be compared to its neighbors. No other country on earth is being held to that standard. No one says that the U.S. can only be compared to Canada or Mexico; in fact many experts seriously claim that we should have followed the New Zealand strategy, a tiny isolated island country smaller than many metro areas in the United States. No one says that Germany can only be compared to France or Austria or The Netherlands. Or Spain with France and Portugal. Or South American countries to their neighbors. It’s just become a convenient shorthand excuse in a desperate attempt to confirm pre-existing biases.

Oh and speaking of Germany, here’s how deaths in Sweden and Germany look over the past 15 months: 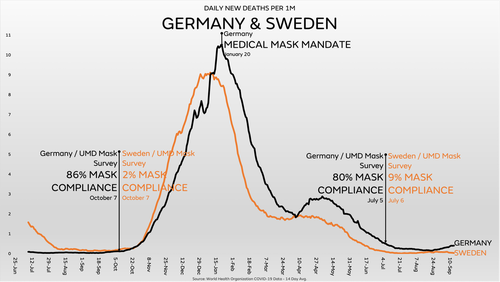 Germany put on a “master class in science communication” according to CNBC, Sweden is a renegade disaster, and yet Germany’s done worse for the majority of the last year. I wonder if you surveyed Americans or Brits or anywhere else where the media is relentlessly dedicated to pseudoscience, if they would be able to identify which of the two countries had done worse over that time frame.

I don’t think it would go very well!

So to answer the question, why does no one talk about Sweden anymore? It’s because it’s no longer useful for the media to promote their agenda.

When Sweden’s numbers looked disproportionately bad, it was a valuable tool in the media playbook of masks, lockdowns and endless, condescending fear-mongering. “Look at what happens if you don’t do what we tell you, peasants.”

Now that Sweden has dropped to 40th in COVID mortality rate, and continued to report extremely low recent rates of both cases and deaths, they’re suddenly uninterested.

It’s a microcosm of the disastrous, indefinite mess we’re living through — experts incorrectly, hysterically screeched that masks and business closures and capacity limits were absolutely necessary to keep COVID “under control,” and the media immediately assumed their role as promoters of incompetent groupthink and professional scolds of any who disagreed.

Sweden went against the herd, thus they must be scorned and labeled by the arbiters of acceptable opinion.

There will never be a reckoning or acceptance of fault on the part of the media, because they are incapable of correcting their preconceptions and admitting that The Science™ was wrong. They placed their unquestioning faith in experts having a level of competence that they simply do not possess. And if there were any sanity or justice in the world, they would be held to account for their inaccuracy and the influence it’s had on COVID policy.

But of course, as we all know, sanity and the Age of Reason and Enlightenment ended with “15 Days to Slow the Spread,” 549 days ago.